It’s pretty rare that I try a wine under $15 that is a must buy, but the 2010 Graffigna Reserve Malbec is now high on my list to have again. Originally sent to me for Malbec Day #malbecday, this wine sat at an old address until just this past weekend. I’ve never been a huge fan of many lower price Argentine Malbec because of their jammy single dimension character but this wine, but this week’s #wowwine (hashtag on Twitter) is a winner. 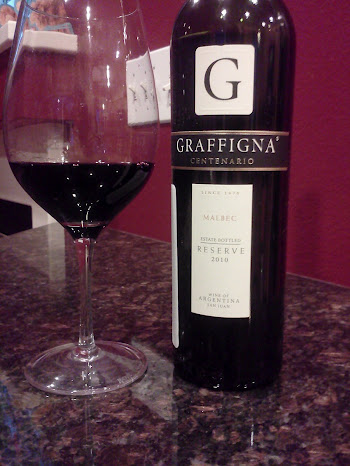 The Graffigna Malbec is very dark and extracted in the glass with hints of ruby red tones around the edges. It’s a pretty, yet ruggedly handsome wine with a thickness of hue. Aromas of plum, tobacco, blueberry and vanilla erupt from the glass. It reminds me of a few Washington Malbec that I’ve had over the years. The palate is definitely fruit forward without being over the top like sucking on a jolly rancher. There is a hint of blueberry preserve action going on like in a jelly filled donut. I like how the palate evolves to include black pepper and the characteristics of strong oak aging. You’ll like this wine if you enjoy full flavored (fruit first) wine. If you’re turned off by full fruit with medium oak characteristics, this wine may leave you feeling a little like a tree hugger. I’m all in at the price point of $13