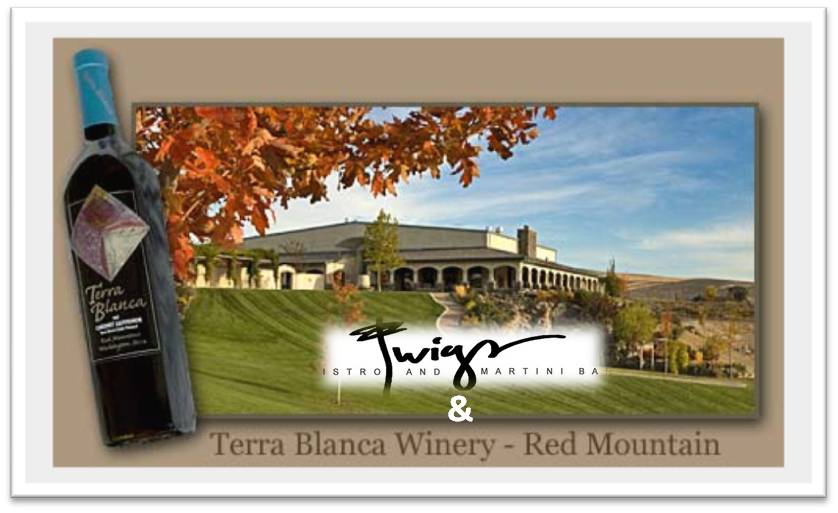 Keith and ReNae Pilgrim are pleased to announce that they have selected award-winning Twigs Bistro and Martini Bar to be their exclusive caterer for the winery event facility and for the winery’s weekend cafe, Café Orsa.

“Since we opened the new building and event facility on Red Mountain in 2006 the winery has worked with a variety of restaurants and caterers but with the movement of Twigs, a longtime winemaking partner, into the community we were presented with a unique opportunity,” said winemaker Keith Pilgrim.

“We’ve been creating wines for Twigs and the Blackwell family, who own the Twigs restaurants up in Spokane, for five years. We kept talking about having Twigs in the Tri-Cities because we enjoyed their food and liked the family nature of their business. ReNae and I recognize the trust they put in Terra Blanca by having us make the house wine for their restaurant, TnT, so we know going into this partnership that we have a close working relationship.”

Trevor Blackwell, Owner & Chief Operating Officer for Twigs said, “This is a great opportunity for us to work with a business that mirrors our beginnings. Twigs and Terra Blanca are both small, family-owned businesses with roots in eastern Washington. We’re not big corporate chains, we live where we work and we know where our food and grapes are grown. That means guests at the restaurant or at the winery can count on us to showcase the best of local produce, meat, fish and Terra Blanca’s wine.”

Beginning January 1, 2012, Executive Chef Jonathan Holden will be working with the Pilgrims and Director of Banquet Sales Gretchen Wiseman to create menus that are exclusive to events held at Terra Blanca including weddings and corporate meetings and dinners. Menus will focus on sustainable and Northwest cuisine for the winery’s increasingly popular Friday night Happy Hour late openings and weekend hours.

“Twigs brings not only up-and-coming cuisine and spectacular food and wine pairing knowledge, but also a commitment to exemplary customer service. Our clients have come to expect a superior level of service and the chef and staff of Twigs along with our wine staff will allow us to exceed even those expectations,” said Wiseman. “The combination of Red Mountain wine, with beautifully prepared local food, served in a thoughtful way in our stunning facility? There’s nothing else like it.”

About Twigs Bistro and Martini Bar

The Blackwell family started Twigs Bistro and Martini Bar in Spokane WA in 2001.  Over the last ten years they have expanded their operations to five locations in Spokane.  They are continually voted awards by Spokane residents’ in categories of “Best Cocktails,”  “Best Appetizers,”  “Best Martinis,”  and “Best Patio.”  In early 2011 they started looking at opportunities outside of Spokane and felt that Tri Cities was a perfect fit.  The Columbia Center Mall location opened in October of 2011 with a 7600 square foot state-of-the-art restaurant.  Twigs proudly employees over 300 people between Spokane and Kennewick.