While looking at a map of Washington State’s American Viticultural Areas with a couple of customers at Nectar Tasting Room the other night, I came across a soon-to-be AVA just northwest of the city of Yakima called Naches Heights. Due to Washington’s abundance of distinctive microclimates, landscapes and soils, eleven official AVAs have been added to the state’s map since 1983. One thing intrigued me about Naches Heights: it will be the first 100% organic AVA in the entire United States. Being the secret Hippie that I am (I buy organic produce whenever possible, and read the ingredient labels on EVERYTHING I buy at the grocery store), I excitedly decided to dive head-first into the subject of just what it will mean for Naches Heights be an organic AVA. 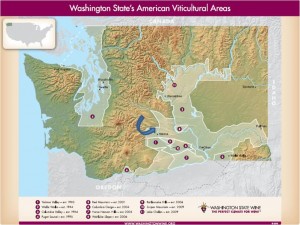 I was immediately surprised that a 100% organic AVA didn’t already exist in California, which pioneered the practices of organic and biodynamic grape-growing and winemaking in the US. In fact, Mendocino County has branded itself as “America’s Greenest Wine Region®,” as the numerous AVAs within it contain the largest number of certified organic vineyards in the country.

So, what makes Naches Heights unique? Located within Yakima County and the greater Columbia Valley appellation, the area consists of a 13,254-acre plateau ranging in height from 1,200 to 2,100 feet. One million years ago, the region was formed by a volcanic eruption from what is now the Goat Rocks of the Cascades. Left behind were rocky deposits of Andesite lava. Since then, other volcanic eruptions have filled the pockets in between the Andesite “pillows” with fertile loess soil. Due to Naches Heights’ high elevation and gradual westwardly decline, the grapes enjoy ample sunshine during the day but cool off at night as potentially damaging, freezing cold air flows away. Grapes thus ripen slowly, and the wine produced from them is ultimately more balanced, with less sugar to convert to alcohol and a natural acidity. 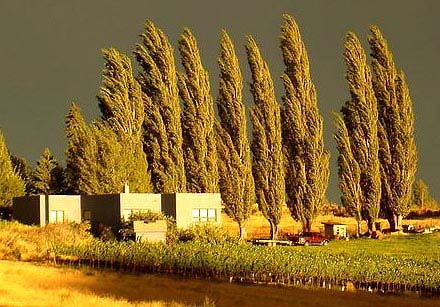 The landscape on Naches Heights facilitates organic grape-growing. Phil Cline is a third-generation farmer from the area, and currently oversees all 35 planted vineyard acres. Included are his own Naches Heights Vineyard and plots belonging to Wilridge Winery and Aecetia Vineyard (scheduled to open a tasting room on-site in 2012). Cline says that the rocky Andesite deposits naturally partition the plateau into 15-20-acre plots of farmable land. Because large-scale commercial farming and the use of mechanical harvesters are not really possible, attention to detail is easier, and all of the grapes are picked by hand. Organic farming, says Cline, requires being more proactive and observent, “which makes us more astute… We have to catch things before they get out of hand, and think about the weather more.”

The soil and climate also contribute to the success of Naches Heights’ organic grapes. Paul Beveridge, Owner and Winemaker of Wilridge Winery, planted a 10-acre test plot there in 2007. Included are 23 different varietals, among them the Spanish Tempranillo, Italian Nebbiolo and Sangiovese, all five red Bordeauxs, Sauvignon Blanc, Riesling, Muscat and two types of Port. All survived 2010’s record cold temperatures, and this year will yield the first full crop. Both Beveridge and Cline believe that nearly any type of grape will thrive, with the exception of warm-climate varietals like Grenache and Mourvedre, and late-harvest.

How is organic farming distinct from conventional methods? According to Beveridge, organic farming is “more about what you don’t do: no pesticides, no synthetic anything.” What truly defines the methods used, however, are the certifications obtained by the individual growers. Currently, all of the vineyards on Naches Heights are certified with at least one of the following designations: National Organic Program, Demeter Biodynamic® or LIVE (Low Input Viticulture and Enology). These rather expensive certifications will ultimately protect the credibility of Naches Heights as an organic AVA because, as Cline says, organic farming is “not the easy path,” and it is unlikely that a grower will go to the trouble of obtaining them under false pretenses.

A common reaction to the mention of the word “organic” in association with wine is to turn up one’s nose — and perhaps for good reason. Wine is made from fruit, and, like any fruit, will tend to brown and go bad. To preserve it, Beveridge and Cline believe that it is essential to add sulfites. In fact, says Beveridge, that is why less than 1/2% of wines on the market are organic [a wine may bear the “USDA Organic” seal only if it contains  95% organic ingredients  and less than 10 ppm (parts per million) of sulfites]. While sulfites are a natural preservative and byproduct of fermentation, an additional “dose” is needed to protect wine’s color and flavor, and improve shelf life by preventing oxidation, spoilage and further undesirable fermentation. Without them, says Cline, there would be no margin for error. (And if sulfites are getting a bad rap for purportedly causing “wine headaches,” Cline believes that the histamines in wine are the actual culprit!)

Cline and Beveridge fully expect that the Naches Heights AVA will be signed into existence this month by the TTB (Alcohol and Tobacco Tax and Trade Bureau). In fact, they’ve already planned a party in September. Although Naches Heights will make history by becoming the first 100% organic AVA in the country, it will remain so only if all of the growers within it continue to use organic farming practices. Several factors might aid in the process: the uniformity of the soil across the entire plateau combined with the success of the existing vineyards at organic farming; clean water from the same mountains that feed the Yakima-Tieton Irrigation District; and the high amount of silica in Andesite lava, which is of benefit to biodynamic farming. Due to the amount of acreage not yet planted, to impose organic practices on all future vineyards might be a daunting, if not impossible, task. The hope is that the organic growers of Naches Heights have started a trend that will catch on. Says Cline, “This is a lifestyle choice. We hope that we’ll lead by example and that others will want to follow.”

Sulo Abeid is a wine slinger at Nectar Tasting Room and the mother of two. Sulo is a graduate of Gonzaga University and is currently studying for her Masters in business administration at Whitworth University. Sulo’s wine experience comes from her years as the tasting room manager at Lone Canary and work at other Spokane wineries.