November 23 and 24 were the punctuation mark on a long cool growing season for Washington grape growers. With temperatures plunging from 30 degrees to -4 degrees and lower in a matter of a few days, vineyard managers were scrambling. As wineries wrapped up the 2010 harvest, doubts about the 2011 harvest lay heavy on many people’s hearts. Much of the damage will be uncertain until Spring but many areas had a lot to be thankful for over the holiday.

Washington grape growers understand hard freeze. With one coming every 5-8 years, this part of the business is nearly unavoidable. Not every region in the state is susceptible to hard freezes. Much of Washington’s grape growing region lies along the moderate temperature control of the mighty Columbia River. There are some vineyard sights in higher elevation, or away from water that can cool off quickly.

Michael Haig, of Spokane’s Whitestone Winery, manages his wineries estate vineyards off of Lake Roosevelt, an area of the Columbia River created by the Grand Coulee Dam. Michael explains the potential devastation of a hard freeze and shows how wineries check the primary, secondary and tertiary buds for damage. What makes this freeze unique and potentially damaging is how early and how quickly the freeze came. Haig says, “Over time the buds will become cold hard, which means as the temperature slowly drops, the buds can withstand colder temperatures.” Michael peels back the layers of the bud to expose a positive sign, green. The primary buds, at Michael’s vineyard, remain intact indicating a full harvest for 2011.

Many vineyard managers I contacted held similar sentiments regarding damage, “I’ll let you know in the Spring.” An article in the Tri-Cities Herald by Andy Perdue paints a grimmer picture in certain areas of the state.

“It’s not pretty,” said Rob Andrews of McKinley Springs Vineyard in the Horse Heaven Hills. “It’s too early to tell 100 percent what is going on, but in the 30 years I’ve been growing grapes, this is the hardest I’ve ever been hit. We’re looking at a tough 2011.”

Preliminary investigation reveals little to moderate damage in most areas with Horse Heaven Hills containing pockets of greater damage. Damage will depend on grape varietal and specific topographical location for many of the vineyard blocks. The results will reveal themselves more fully with the Spring thaw.

The Washington State University Viticulture and Enology program has an informative Cold Hardiness Website that breaks down the potential damage to various grape varieties. According to the site, the more cold hearty varietals include Chardonnay, Pinot Gris, and Riesling. The more fair weather grape varieties are Barbera, Mourvedre, Syrah, Cabernet Sauvignon, and Sangiovese. A mere 5 degrees can separate 10% bud loss from 90% primary bud loss. 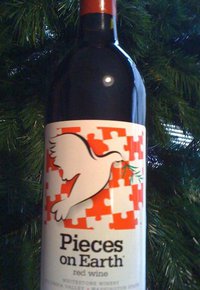 During my visit with Michael, he was excited to announce the second annual release of the Pieces on Earth red blend. The wine is one of four wines that make up the Pieces series (Pieces of Red, Love You to Pieces, Scared to Pieces, and Pieces on Earth). The predominately Cabernet blend is available for a limited time and has a special holiday label. The medium bodied blend has a balanced structure of dark red fruit, coffee, cigar box, and moderate cedar. The tannins are well integrated and perfect for enjoying now or with your upcoming holiday dinner. At $20, this is a solid 3+/5

Whitestone will be releasing their 2007 Merlot on December 17. From Michael:

“This is our most coveted and award winning wine. In blind competition, our Merlot has won gold at every major wine competition in the United States, along with being named Top Merlot for the State of Washington.  The 2007 vintage features rich textures of leather and spice adding deep texture to rich raspberry and currant. Ripe tannins find harmonious balance in this well structured wine, which finishes off with a long, smooth after taste. $26 bottle”