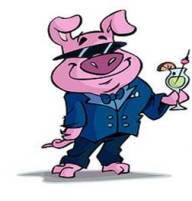 Depending on your culinary outlook, that either sounds vile and repulsive or intriguing and potentially even romantic.  I definitely fall into the latter category, particularly when we’re talking about the chemical marriage of bacon flavor and bourbon.  Of late I’ve had this growing addiction, and I figured it was time to come out of the closet, as it were, and share what I’ve learned.

But before we get to the “how” let’s talk about the “why”.

Let me start by saying that if you hate bourbon in its natural state, or if you’re kosher or vegetarian/vegan, bacon bourbon is probably not going to be your bag.  For the rest of us, combining the deep, sometimes smooth/sometimes fiery nose and throat of bourbon with the comforting, smoky and savory warm embrace of bacon can produce a borderline manic giddiness (at least for me).  The first time I tried it in a meticulously mixed Manhattan, I actually giggled.  Giggled.  In public.  In a posh San Francisco cocktail lounge.  And nobody looked at me funny.  Because they knew.

If you’ve made it this far down the post, you’re probably on team bacon, so I’ll wrap the pleasantries and get to the good stuff.

Fat washing is a process where alcohol strips the flavor, nay the very essence, of a fatty food and then allows you to easily remove any remaining physical animal product from said alcohol.  This leaves just the alcohol you started with, plus that essence.

Buy some bourbon, some bacon, and a container.  Since I’ve been experimenting, I didn’t go ridiculously expensive, though it stands to reason that better bourbon will make better bacon bourbon.  I’ve used Makers twice, and now that I know what I’m doing I’ll probably try something new next time.  But Makers is up to the job.  I also used some thick sliced maple smoked bacon from a local producer.  Again, the better the bacon, the better the bacon bourbon.  Finally, a container.  After scouring the city of Memphis, I’ve  found that the best fit for a 750ml bottle of booze are the little quart mixing tubs you get in the paint section at Home Depot or Lowes like this:

Make some bacon.  Five slices of thick sliced bacon gives me the flavor I’m looking for with a 750ml bottle of hooch, but play around with this.  I’d suggest trying it this way once and making a call.  Remember, the objective is to collect the essence of bacon, not to make your bourbon taste like bacon grease.  Resist the urge get ridiculous.  And there will be an  urge.

Do.  Not.  Burn.  The.  Bacon.  Or even overcook it.  We’re not making bourbon and bitters in one fell swoop here.  You’ll also have to find a way to dispose of the cooked bacon itself, since it doesn’t play a part.  I’ve got a few suggestions for that, but I’m fairly confident you’ll figure it out. 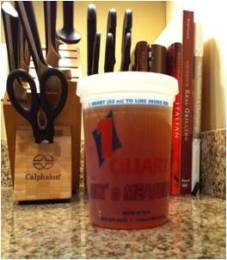 Let the bacon fat cool to the point where you can dip a finger in without crying.  It needs to be hot enough to still be fluid but cool enough to keep the booze boozy (nothing would be more disappointing than cooked, nonalcoholic bacon bourbon, eh?).  Pour the bourbon and the cooled bacon fat into your (CLEANED) container, give it a little stir, seal it up and set it on the counter for four or five hours.  Don’t worry if a few bacon bits make their way in, they can only help the process so long as they aren’t burned.  Resist the urge to open it up and see what’s doin’- all you can do is mess it up.  It doesn’t need to be stirred, shaken, or molested in any way.  Just let it hang tight.  The alcohol is doing its job and stripping all those glorious flavors from the fat and bits of flesh floating about.  This is the magic.  Four or five hours at room temperature will do the trick.

Put it in the freezer overnight.  This is doing nothing for the infusion, but it’s going to make getting the fat and flesh out a piece of cake. 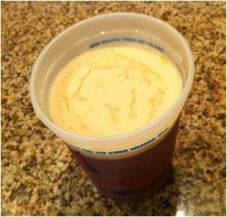 Yawn and stretch.  Have your morning cup of coffee and a bagel.  Then go see what chemistry has done for you overnight:

Looks a little nasty, but who wants to drink fat?  Okay, I won’t answer that for fear of making you throw up a little (because I could imagine a scenario where I’d try it).  But overnight the cold has separated the fat from the bourbon and given you a nice little fat cap that can be cut off and discarded in your method of choice.  At which point you can now strain the bourbon back into the bottle it came in (or something decorative, if you prefer).

Enjoy.  A lot.  In any way you see fit.  My favorite so far is a bacon old fashioned.  2oz of bacon bourbon, a couple dashes of Angostura bitters (or a VERY SMALL bit of orange peel tincture if you’re feeling particularly chemtastic), a bit of maple syrup (in lieu of traditional simple syrup or sugar), a splash of water and a cherry.  Stir it gently and pour over a couple of ice cubes in a rocks glass.  On first taste it will be very much like every other old fashioned, but when you exhale you’ll get the nose.

And then you’ll giggle.  A least just a little bit. 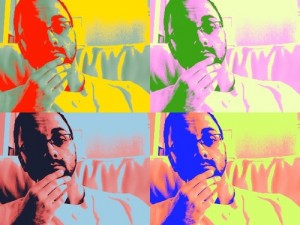 Dustin Cann is a traveling business consultant (39 trips in the 52 weeks of 2009) who loves his work, but would rather be a rock star.  He’s a foodie and an appreciator of both haute cuisine and pub food.  When he’s home, he plays around in recording studios and relaxes on the lake with a blind pug called Honey.  He lives in Memphis, Tennessee with his partner of eight years and almost surely needs to drink fewer Manhattans.

3 comments on “When Pork and Bourbon Make Love”