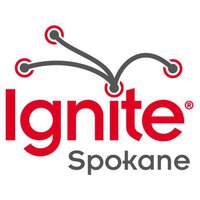 If you had five minutes to share anything you wanted, what would you say? Ignite is a global phenomenon that sparks creativity and inspiration in each host city. Ignite was inspired by Pecha Kucha Nights, where speakers are given 20 slides, each shown for 15 seconds, giving each speaker 5 minutes of fame.  The first Ignite took place in Seattle in 2006, and since then the event has become an international event with gatherings in Helsinki, Finland; Paris, France; New York, New York; and many other locations.

Produced by perketing.com, Ignite was brought to Spokane by local business woman Margaret Croom of Nosey Parker guide books. The first Ignite Spokane was September 30 and 15 speakers lit up the Bing Crosby Theater with a range of creative, inspirational and motivational presentations.

Some stand out messages were a humorous look from author Deanna Davis on why “Children should Rule the World,” and an inspirational message of overcoming lymphoma from fiction author Tony Hines. Barb Chamberlain shared how bikes will save the world and news talk radio host Angela Monson talked about the power of faceless communicators. The most unique and humorous messages of the night was presented by Ashley Paulus, “Feminism & the Jersey Shore.” This unique look at the cast members of Jersey Shore and how they are empowering a new generation of women was creatively and eloquently presented.

The next Ignite will be in February. What would you say in 5 minutes?

I was honored to be among the presenters and chose to speak on something that I think is often overlooked in social media and marketing campaigns, listening. We live in a world that loves to talk in 140 bite size chunks, status updates, blog posts, and videos but is anyone really listening? How do you get heard among all the noise? Five minutes, 20 slides…here is what I had to say!