“How do you taste wine online?” “Is it just me or am I the only one who doesn’t get mass twitter wine tastings?” These are a few of the questions, I’ve heard related to the “taste and tweet” phenomenon. What is the benefit to the mass twitter fury, chatter, and tweet noise? I’ve participated in about a dozen online wine taste and tweet events. Some are small affairs featuring one wine from one winery with a group of 10-15 people. Others are massive world-wide tastings that bring together consumers, trade, aficionados, and beginners for the joy of the grape. The benefits of participating are many!

The intimate twitter tastings have been fun and informative. Experiencing 1 or 2 wines with a group of people, and often times with the winery, opens up my eyes to new things about the business of wine and the joy of drinking it. Each time I walk away with at least one new piece of information and one new twitter friend.

Mass online wine tasting events are an adventure and can often be overwhelming as you sift through the incredible cacophony of chirps and tweets. The recent #Cabernet day, while organized by Rick Bakas of St. Supery winery, quickly grew to be owned by the entire online community. A true use of the organic nature of social media, #Cabernet day was celebrated in New Zealand, Australia, many European countries, South America and North America. I even saw tweets from China as Brian Wing of norcalwingman.com struggled to find good #Cabernet. Several dozen wineries in Walla Walla joined together for a trade celebration. Large meet-ups were organized in Seattle, Phoenix, San Francisco, New York and more. Morton’s Steakhouse restaurant chain promoted #Cabernet day at all of their locations. Five Spokane wineries got on board offering discounts to Cabernet lovers across the city. The result, the king grape Cabernet, showed its worldwide dominance. Pretty amazing for something that started as a single tweet. There is power in an interconnected community that embraces a collaborative spirit.

As I tweeted and tasted three amazing #Cabernet Sauvignon, a few things came to mind. One, wow, people love their Cabernet. The sheer volume of tweets and participants dwarfed the previous tastings I’ve hosted and participated in. Two, consumers were everywhere. Hundreds and thousands of tweets and Facebook wall posts from people not in the “trade” consumed my feed. Three, where was the media or power players? Apart from a large presence from WineLibrary.com and Corkd.com, I saw very little interaction and involvement from those who are proponents and communicators of wine news. Where was Wine Enthusiast or Wine Advocate? How come bloggers and writers like Dr. Vino, Vinography, Tom Wark and others weren’t involved? While I can’t claim to know their schedule or their reasons, it was just a curious observation.

As a newbie to the online community, involvement for me means connecting with people. Keeping up with the blur of tweets is an overwhelming challenge but tasting along with everyone else exposes me to new people and also helps introduce my blog to fellow wine lovers. As a blogger, I want people to read my blog. I write about wine. How often do you get the opportunity to potentially touch 2000-3000 like minded people at once with your brand? For me, not being involved is a missed opportunity in my book.

Before I talk about #Cabernet day stats, it is helpful to put it in perspective with other successful broad scale online tastings. Bakas’ first event of the year, #CaliCabs generated about 1400 tweets from 275 participants. Our first Washington based tasting, #WAMerlot, brought 480 people together online for 1900 tweets. On May 6, #Chardonnay swelled to over 600 participants. Earlier in the summer, winetonite.com , suburbanwino.com, and sipwithme.blogspot.com hosted Pinot Noir with 2000 tweets by 325 people. This brings us to #Cabernet. Buzz leading up to the day indicated that the event was going to be massive. The twitter machines seemed to be coming alive with a love of #Cabernet. The result (according to www.wthashtag.com): 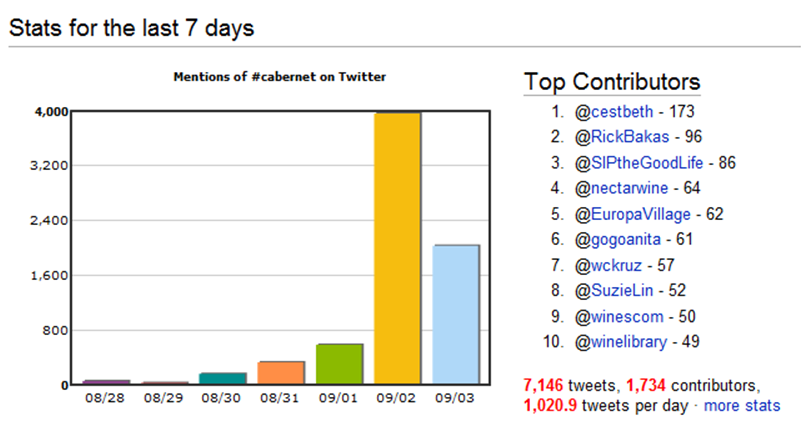 In addition to tracking tweets, Booshaka.com indicates that there were over 3500 Facebook wall posts mentioning Cabernet. This, combined with the 50+ in person tasting events easily drives potential participation rates to well north of 3000 people. Imagine the wine sales! Consider the economic impact! Keep in mind the total dollar amount spent to promote the event – $0

10/28 – Champagne – Toast to wine made in Champagne, France http://champagne-day.eventbrite.com/ (Hosted by www.vintuba.com)

The NectarView – Hip Hip Hooray for my Cabernet

Check out this great video from Caymus Vineyards about part of the wine making process.

14 comments on “Cabernet Day Is A Massive Success”