Part rant, part plea, part observation, this is the story of a region on the verge of growth. Some live in fear of the invasion of the white man like Marcus Whitman and the Cayuse Indians. Others are clinging to ideals that strangle progress and still others are embracing the potential of the region with open arms. 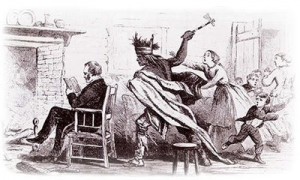 Spokane, just 3 hours north of Walla Walla and 2 hours from the heart of Columbia Valley is poised to become a wine tasting destination. Currently with 17 wineries to serve the population base of 500,000 in Spokane County (and another 150,000 in North Idaho’s Kootenai County), residents tend to leave town to visit “wine country” rather than experience the wine created in its own back yard. Spokane is home to three “large” wineries that boast production greater than 15,000 cases. The remaining wineries range in size from 500 cases to 5000 cases and often get lost in the glow of the mansion on the hill. Some of these wineries are consistently receiving high praise from the magazine elite and are adorned with precious medals won in the battle of competition.

Recently, news trickled down the grape vine of a new winery opening in North Spokane’s Greenbluff district. This farming community is always bustling with activity as residents pack into their soccer vans and four wheel urban assault vehicles to pick fresh fruit. Currently Townshend Cellars (20,000 cases) and Trezzi Farms (500 cases) hold down the grape canopy. A third winery in the district would certainly boost appeal and would add to the “day trip” destination.

Terranova Cellars, producing wine in Walla Walla but without a retail tasting room, chose glorious Spokane to unveil its passions to the world. Brent Bendick became the assistant wine maker for Isenhower Cellars in Walla Walla in 2004. Since that time, he’s learned the art and science of wine making. Concurrently, his first Newfoundland, Lalique, found him. Brent discovered a way to combine so many things that are important to him and start his own winery and give back to those who need it, not the least of which are the Newfoundland in the rescue program. With Brent’s wife Heidi earning her MBA from Gonzaga University, a natural Spokane connection existed.

Sadly, Terranova will not be opening in Greenbluff as expected. The Barbera, Sangiovese, Tempranillo, Cabernet, and Rose will not be experienced because of county politics, Greenbluff association disapproval and other facility troubles. Brent and Heidi are sent back to the barrel room to contemplate their next moves. While not solely to blame for the decision, I do still say shame on Greenbluff for voicing their concern over selling wine that is not “grown or produced” in Greenbluff. Yes, Trezzi makes the valiant effort to grow grapes and produce a respectable Barbera but Townshend Cellars has moved production off site (with the exception of the occasional bottling and special barrels). Yes, Greenbluff, your precious T3 is grown, produced and bottled just north of Kennewick, WA. All this from a region that trucks in pumpkins to give the illusion of picking them during harvest.

Rumblings of horse drawn wagons have been heard as wineries from Walla Walla, Prosser, Yakima and further west look to Spokane for the next frontier. With the great land rush in Woodinville moving ahead, wineries are seeing the benefit of an extended tasting room. It’s easier to take your wine to the people than to expect and wait for them to come to you. Washington wineries are allowed two off site tasting rooms. With Seattle and Spokane being the two main population hubs, the next frontier logically seems to be Spokane. 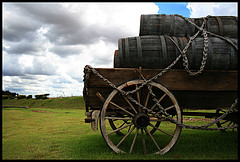 Is this bad for the region? Should we fear the invasion of the outsiders? In this writer’s opinion, the answer is an emphatic NO. What would have happened if Chateau St. Michelle or Columbia Winery pruned the vines of progress? Growth of the region is good for the existing wineries. People look to a destination. A region with 10 wineries spread all across town (like Spokane was just 5 years ago) doesn’t garner much attention. Now, 8 tasting rooms downtown, 5 in the valley and 4 up north, there are distinct tasting regions that encourage day trips, weekend trips and walking tours of downtown. Wine events are happening daily, and the CVB’s First Friday Art Walk has become a signature event in Spokane. The city is thirsty for good wine and entertainment. Don’t believe me; just go to Arbor Crest on any given Sunday evening in the summer. Wine and smiles are all you’ll see.

Continued growth, either home grown or outside tasting rooms, means a greater draw from rural northern Washington, northern Idaho, and Western Montana. Maybe even some of those Tri-Cities folk will head east and do some wine tasting. While some fear the future, the future is coming. I predict 20 tasting rooms / wineries in and around the downtown core in just 5 years. Established wineries should embrace this change and plan for the increased tourism and business. As people visit, they’ll want to find your wine when they return to their homes. Wineries that track visitor patterns, set up appropriate distribution, and extend their tasting room through social media will see the juice flow.

As for Terranova, the journey continues. With 2007 wine bursting at its skins some tough business decisions lay ahead. Brent seems confident that the right doors will open and he can continue his quest of helping the Newfoundland rescue dogs.

Visit Terranova on the web: http://www.terranovacellars.com/

9 comments on “Squeezing the Juice out of Progress”