Rock-n-roll and wine. In my opinion, there is a powerful combination between the raw edge of rock music and the sultry sexiness of wine. Together, you have a velvet edge and raw sex. Wine has also been described as liquid art. Winemakers are artists as they paint the canvas with their blends and create masterpieces that fill the soul. Combine all three…now you’re talking!

Several months ago, I was surfing the twitter machine and stumbled upon a re-tweet that mentioned Gene Simmons of Kiss and an art gallery. Kiss has been my favorite band since I was six years old. In 1978, I dressed as Paul Stanley, the star child, for Halloween. I did it again as a teenager, and now my step-son and I bond by watching Gene Simmons Family Jewels. He even dressed as Paul Stanley for Halloween one year (his make-up and costume are easier to do). Back to the tweet…I opened it up and saw @theartistwells and followed the link to the picture below.

I immediately ran upstairs with my computer to show Kimberly. Ian even got in on the excitement. I remember exclaiming, “I don’t care how much it costs, you can get me this for Christmas.”

If you love rock-n-roll, wine and art, you’ll love the artist Stacey Wells. Her creative Rock Star Reflections series includes such icons as Mick Jagger, Jim Morrison, Jimi Hendrix, and of course her most popular bottle, Gene Simmons. Stacey’s talents have her rubbing shoulders with some of Hollywood and music’s elite. We sit down for an interview talk how she got started painting rock stars and wine, her encounter with the God of Thunder, and her sexy new “Spin the Bottle” series.

*The video includes shots from many of Stacey’s paintings…check it out!* 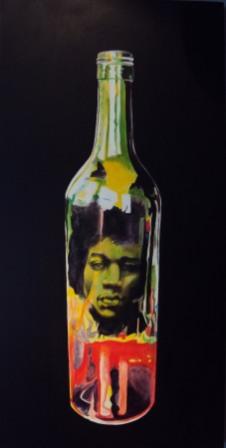 If you liked this post, you’ll love my Rock-n-roll Wine Pairings part 1 and part 2

5 comments on “A Raw Blend of Wine Art and RocknRoll”