Fancy yourself a social media guru? Think you know it all when it comes to implementing a successful social media strategy? Are you a business or brand, just now thinking of taking a bite out of Twitter and Facebook? Quick Bites (Rick Bakas, Baldwin Press 2010) book has something for everyone. 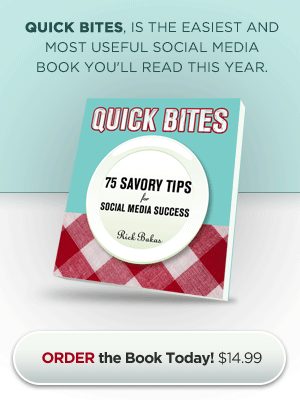 I first met Rick Bakas in November 2009 when I jumped into blogging. Being the new kid to the playground I knew enough to watch the other kids to see who was an influencer, who was a bully and who the popular kids were. I quickly saw how Rick used social media to engage people in his work with the St. Supery brand. In fact, this very concept is bite number 61 in the book, “Engage Influencers.”

“Find people on social media sites that align with your brand who can become brand ambassadors…” (There is more to it, but I’ll let you discover it yourself)

Rick was even kind enough to provide a quote for an article I was writing. I misspelled his name in the article and to make matters worse, I did it again about a month later by misspelling his title. Feeling slightly embarrassed, I reached out and offered my genuine apology. Rick was gracious to forgive.

Forward the clock several months into the future, Rick announces the launch of his new book, Quick Bites 75 Savory Tips for Social Media Success, on May 6 during one of his signature Twitter tasting events. I immediately ordered the book. Why? Why would I order a book, having very little knowledge of what its contents would be?

When you receive the book, be prepared…it is not something you necessarily sit down and read like a self help book or novel. In fact, it’s only 80 half sized pages in length. This is a book of aha moments, reminders, and behavior motivators. I would venture to guess that even the majority of the top “gurus” out there could be reminded of a few things.

I’m going through a crisis of action with my brand as I work through the next steps of leveraging momentum for business ideas. I have to say, I keep a copy of Quick Bites next to my PC just as a friendly reminder. Whether it’s from the seemingly no brainer #8 “Don’t be a Spammer,” to the ouch reminder #24, “Be Humble,” I’ve been inspired to create a more consistent brand and message with every bite that I digest.

Quick Bites is a cookbook full of ingredients to be successful using Social Media. I highly recommend it for anyone serious about developing their brand using Twitter, Facebook and other social tools. If you’re a business that doesn’t know a tweet from a twit, consider this your first bites to chew on. One important reminder that crosses over from cooking to social media is the last item in the book:

Know When to Turn It Off

Just like in cooking if you forget to turn it off, you’ll end up burning out and ruining the whole thing.