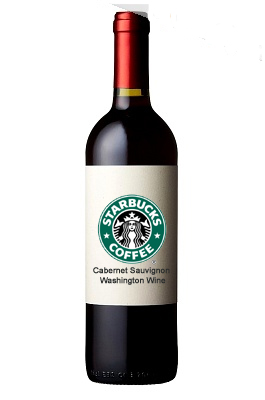 On June 25, Starbucks CEO Howard Schultz announced that it will use a testing ground store dubbed “Olive Way” to experiment with several new concepts. With rampant growth halted, Starbucks is looking for ways to draw customers back to the store. One of the new concepts is to introduce wine and beer as part of its product offering. Is this a good idea? Will doing so completely change the culture of the store, or is it a brilliant move to capitalize on the distribution network to extend sales into the evening hours?

I think it’s a great idea! In fact, I have a 30 page business plan dated June 8, 2007 that speaks to the very brilliance of the idea. Howard Schultz, you’ll be hearing from my attorneys.

The reason for the birth of DrinkNectar.com and @nectarwine on Twitter was to brand the name for the eventual opening of Nectar Coffee and Wine or Drink Nectar Coffee and Wine Bar (still up in the air with the name). I’m a planner. I have a master plan for life. Most of it is in my head, but some things are written down as goals or milestones along the journey. The master plan for the business is to have the wife finish her 20 years at “The Bank,” go to college to get her Masters in Elementary Education and then get settled in her teaching career. While that is happening, I would lay the foundation for the future wine and coffee bar with eventual plans to open in late 2011 or early 2012. Well, the wife is in school and the blog and branding has taken on a life of its own. I’m still trying to wrap my head around the potential opportunities but we’re still moving forward with the master plan.

I realize it’s not a new concept or new idea. I’ve actually seen several similar business models. The majority of people attempting to do this either go mostly coffee with a small wine selection, they have a full stock bar with a handful of “house” wines and something resembling an espresso maker, or they are actually a full service restaurant with a pretty good wine selection. My business will combine retail wine, glass pours of over 100 wines, full service espresso and tea, and light fair food selections (probably pre-made from local vendor to avoid the need for a full kitchen). When I heard Starbucks press release I was at the 2010 Wine Bloggers Conference and I have to admit the news took a little wind out of my sails. First to market matched with scale is a powerful combination. Will there be any room in the market in 2012 when I’m finally ready/able to go with my dream?

Do you think it will work? Is Starbucks on to the “next big thing?” Will a company like Starbucks be hindered or helped by its size and scope? Can Starbucks deal with the challenges of distribution, liquor licensing, branding, selection, knowledge, service, and underage access? I think the concept will work for Starbucks, but only in select stores. To go big in scale, they’ll have to work with a large distributor, and centralize the shipment of wine to their stores. Working with local wineries across their business footprint could be a logistical nightmare. A company like Starbucks will want to leverage any large scale efficiencies to streamline costs and maximize profits (which is what they are really after). The pilot store may include a handful of local Northwest wine and micro-brew, but if the concept expands, you’ll begin to see more mainline brands like Chateau St Michelle, Hogue, Mondavi, and other Constellation and Precept wines. Unlike coffee, where Starbucks can get away with 3-4 different roasts and 8-12 different bulk coffees, wine lovers will not flock to a store with a selection of 4 reds and 4 whites. However, the Starbucks wine concept will most likely be a success. It will eventually do for wine what Starbucks did for coffee. Starbucks involvement in the wine business could be a catalyst to break down interstate shipping barriers too.

Is your barista going to become a sommelier too? One other issue will hinder Starbucks on the road to wine domination. Knowledge…wine lovers are turned off by inferior service and expertise. Inexperienced wine drinkers desire to be educated. Will your local barista have the knowledge needed to service the wine business? Will Starbucks start to hire wine stewards for the later hours in the day? It is one thing to be able to explain the difference between light, medium and dark roast and only a handful of coffee drinkers geek out over the difference between Sumatra and Ethiopian. Imagine the training obstacles with learning the differences between varietal characteristics in even the most basic selection of wine.

While I may have been deflated by the original news, I’m now even more motivated to pursue the business I’ve been thinking about for four years. Starbucks will open some doors and break down barriers of consumer perception of a wine AND coffee bar. BUT…Starbucks will also leave the door wide open for someone to do it RIGHT with attention to local product, large selection, and knowledgeable service.  Thanks, Starbucks, for validating my idea. I wish you much success with “Olive Way” and look forward to the competition. With that said, if you’re a Starbucks executive reading this…feel free to reach out, I’d love to talk about business opportunities.

19 comments on “The Blend of Barista and Sommelier: Starbucks Enters the Wine Biz”