Over the weekend I caught a glimpse of the future; something that could truly revolutionize action TV sports. It could be bigger than fishing or hunting TV. It will be more exciting than TV poker tournaments. I’m a little hesitant in sharing for fear that the idea could actually be picked up by a national show. 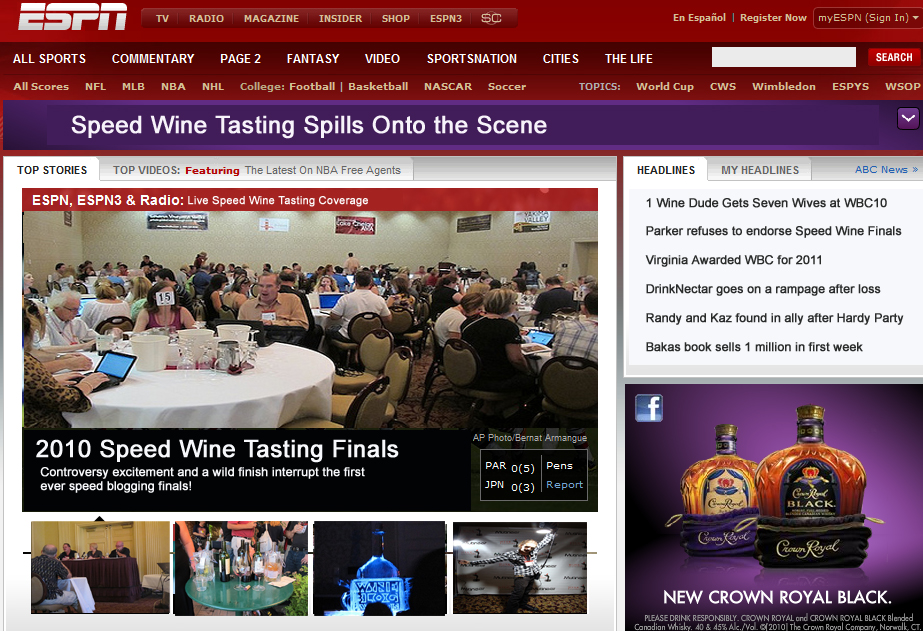 The scene is intense. The room reeks with anticipation…and hints of brett, funk and cherries. The assembled bloggers are cleansing their palates, stretching their tongues and limbering up their nostrils for the event.

Here we are today assembled around the greatest talent in wine writing and reviewing hoping to determine the world champion of Speed Wine Tasting (Red Edition). Our contestants hail from across the US in the hopes to win the coveted @bparkerchuk trophy of a giant nose sniffing a bung hole. “Much love and success to each of you. 100 points *” inscribed on the base.

Round one begins with a fast pace as the winemaker rushes from contestant to contestant pouring and explaining the wine. The camera cuts across each of the blogger/writers serious faces as they begin to examine the wine with vigorous swirls. Thoughts of berries, cherries, cassis, leather, plums, prunes and pencil led come to mind. The camera cuts to Gary V. who spits gloriously in his trademark Jets spittoon. Newcomer Steve Paulo looks perplexed by the mouth feel of the wine and newly crowned blog king Joe Roberts has already submitted his perfectly crafted 140 character tweet and score. The horn sounds signaling the end of round one. What’s this! Gary Vaynerchuk has grabbed the mic and begins talking about the wine’s availability on Cinderella.com and how he met the winemaker back when he sold him a baseball card in the Jersey mall. The side judges quickly regain control and deliberate the outcome of the first round. In a huge surprise, Gary is cited with a black Vinum and ejected from the competition. Gary offers a string of expletives and then reminds folks of the “Thank You Economy” coming out later this year.

The crowd quickly regains composure as round two sounds with the clicking of the 85oz Riedel glass. Everyone gasps at the odd blend of Mourvedre, Syrah, Counoise, and Cinsault. This may prove to be a difficult round. In a bold move with only one sip and spit, both Fredric Koeppel and Steve Heimoff confidently submit their post.  Let’s watch that again in slow motion…will their haste prove to be a good strategy or will one of them be eliminated? The bell rings and Pamela from Enobytes is having trouble submitting her post. Twitter API is frozen! The judges huddle and extend the time by 30 seconds. Everyone has their entries in and the judges quickly review the submissions to determine the winner. The scoring is close with Heimoff pegging the wine almost to a tee. Missing the flavor profile and the score by just one point, Pamela is eliminated. Damn that fail whale.

The energy in the room continues to rise as the rounds progress.

Kori Voorhees is eliminated after round three. Strangely enough the wine was a Woodinville winery from her backyard. Dejected Kori and Colby rush from the packed auditorium trying to escape the media interview. As Randy and Kaz from WineBizRadio.com try to stop them, Colby takes the camera and smashed it to the ground.

Round four ends with the elimination of Steve Heimoff. He is disqualified for going over the 300 character limit as his post includes a rant against the Republican leadership in California and a dissertation on how no money will ever be made in wine blogging. He’s escorted out of the room by security.

With only four contestants remaining the fifth round begins. The purple tooth stains and barrage of tannin and acid are beginning to take their toll on the contestant’s palates. A strange purple stain had developed on Mancebo’s chin…and oddly enough on his bald head…Joe Roberts has a commanding lead with each review coming in at exactly 140 characters. The contestants battle through the round when out of the corner of his eye, Joe catches a glimpse of Geddy Lee from Rush in the stands. Immediately he faints from excitement and is disqualified. After calming the crowd and reviving Joe, the play continues.

Three contestants remain; Mancebo, Koeppel, and newcomer Steve Paulo. Mancebo’s eyes seem a little bloodshot and he’s struggling to find the keys on his iPad. A bead of sweat drips from his chin into the glass. The wine is the Molly Dooker Velvet Glove. As he stares into his glass his face turns flush and he quickly rises. “No wine should be 16.8%ABV this is a travesty against wi….” In mid-sentence he falls forward onto the table sending purple spit juice everywhere. For several minutes the scene is chaos. The head referee calls for a 30 minute break so the contestants and compose themselves and clean the spit out of their hair. In a post interview, Mancebo says, “I guess the lesson here is to spit. I let the excitement of the day get to me. I’m a professional, I should know better than that. I’ll be back next year.”

The lights dim and the music comes up as the final round begins with perennial award winner Fredric Koeppel and the new kid Steve Paulo surviving to the finish. Intense stares of determination are fired across the table. The wine poured is a 1949 Chateau Ausone. The stage is set and the audience is eerily quiet for the first time all evening. The sound of swishing and spitting can be heard across the room. Both writers deliberate, sketch a few notes and deliberate some more. A commotion arises from the back of the room. Bursting into the room is Joe Powers from AnotherWineBlog.com. “This is a scam, this is a set up! Who are the judges? How the hell did these people get picked to be in the finals! I demand to know!” He overturns the table crushing Koeppel. Paulo attempts to restrain him, but Joe (more crafty than he looks) eludes his grip and rushes off. Screaming toward the exit, “I bet Tom Wark is behind this madness,” Lenn Thompson from NewYorkCorkReport.com dives from the mezzanine level and tackles Joe. Lenn quickly restrains him and stuffs his head in the only remaining spit bucket.

What a night. What a sport. Dazed, the officials and referees head to the replay booth to review the tape. After several minutes of deliberation, they return to declare Steve Paulo the winner by default as he is the last man standing. This new sport is sure to take hold across the country as wine bloggers turn in to rock stars and thousands clamor to the scene.

57 comments on “The Sport of Speed Wine Blogging”