We’re all looking to save money. Buying something for a bargain makes us feel a sense of accomplishment. It’s easy to agree that getting a new Chevrolet Corvette for $10,000 is a bargain (if not a steal), but is it a bargain to pay $3 for a bottle of wine that tastes disjointed, tart, sour, and thin? The definition of a bargain is “Something offered or acquired at a price advantageous to the buyer.” A used Paul Reed Smith Custom Ten-Top with bird inlays for $2000 would be advantageous to me, but not for everyone.

Grocery Outlet is known for low prices on food items. While I’ve never considered G.O. a place for wine, I learned from my Twitter friends that several often find deals there. Evidently there are more bargainistas out there than I imagined. Ahead of their bi-annual wine sale (March 30-April 3) Grocery Outlet reached out to me with a fun challenge. They offered me two $50 gift cards – one to use to buy wine and the other to give away to a lucky viewer/reader. I have to admit that at first I was conflicted about being “paid” in wine to promote an event, but I see it as an opportunity to uncover a good value for those that read this blog (thanks, Mom). It’s also pretty cool to be able to give someone $50.

So, off I went with my preconceptions in search of the $7 bottle of Opus One, and the $4 Clos de Betz. Each of the 130+ West Coast stores is independently operated, and from what I hear, wine selection varies greatly by location. The Spokane location on Sprague Ave had a decent sized section of wine. If you’re looking for a wine steward, shelf talkers, and organized bottles – go somewhere else. If you’re looking for wine that is as low as $3 and $60 Napa wine (retail) for $15, then you may be onto something.

Armed with my $50 gift card, I walked up and down the aisles looking for labels I recognized, appellations that have respect, and the biggest mark-up. 30-minutes later the till said $61 (pre-tax) for my 8 bottle score ($7.62 average). Sadly I only saw a few labels I recognized. With a low of $3 and an outlandishly expensive $15, I left a little uncertain of how this experiment would take shape.

Okay – so for me this was not a deal. Keeping it real here, this wine ended up down the drain. I’m sure that there are some folks who would be okay with it, but for the majority of wine lovers, this is no deal.

Cellar Tracker – Seven people have this in their cellar (all purchased from Grocery Outlet), but no reviews.

I had high hopes for this wine, being from Napa Valley. So far, neither of the two wines I selected would qualify as “bargains” for me. Three of the remaining four are from labels I recognize, so I’m hoping for good things. 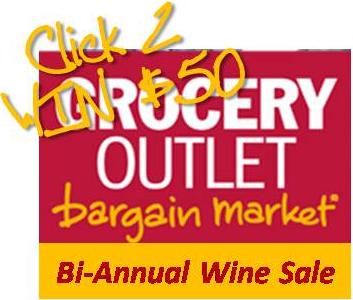 Stay tuned! Have you ever found a bargain at Grocery Outlet? Want to win $50? Leave a comment.

68 comments on “How Do You Define Bargain?”