Wineries in California had the chance to observe the power of a unified voice on Twitter on February 11. Like a gigantic tasting room frenzy wine lovers, wineries and wine makers converged on Twitter for two hours to focus on California Cabernet.  In his effort to promote California wine and show wineries in the region the power of Social Media, Rick Bakas (director of Social Media for St Supery winery) launched the event through word of mouth using Twitter, Facebook and the good old fashion phone call.

When I talked to Rick on the phone you could tell that while the event has some built in exposure for Rick and St. Supery, he was jazzed about the buzz happening at other area wineries. Rick lives and breathes the power of Social Media but he also has a genuine passion for California wine.

Early stats indicate that the event was a success with over 1500 tweets from 250 people during the two hour block. Those numbers don’t take into consideration the countless people NOT tweeting but still participating in California tasting rooms and tweet-ups.  All told, in one two hour time frame, over 1000 bottles of California Cabernet could have been consumed! Total marketing cost of the event $0 (that’s ZERO)! 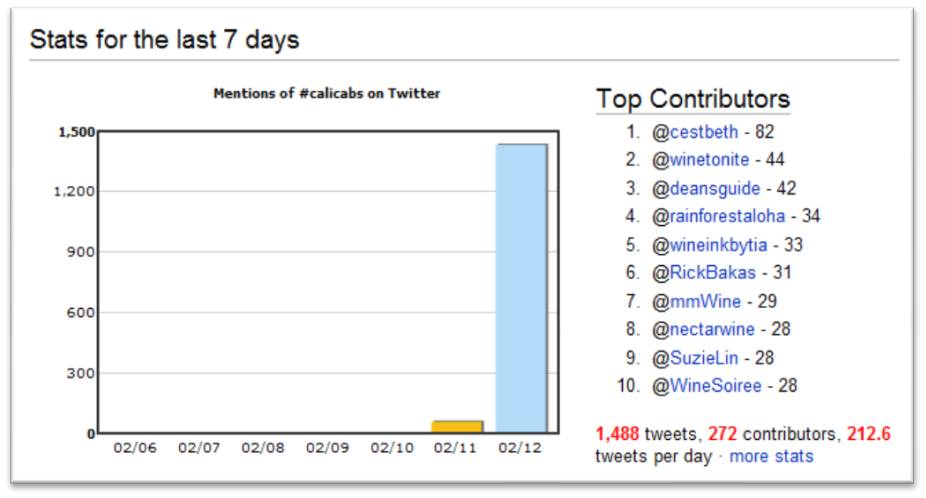 Steam continues to build as Rick announced a Sauvignon Blanc focused twitter tasting on March 4 (hashtag #SauvBlanc). Also, stay tuned for a huge Washington wine event in late March that hopes to have some national tie-ins and collaboration with several Washington wine influencers on Twitter (announcement coming on February 23).

Other scores from Cellar Tracker range from 84 – 90 points

Other score on Cellar Tracker is a 93 and well deserved!

Did you participate in #CaliCabs? What wine did you enjoy? If you didn’t participate, what is your all time favorite California Cabernet and why?